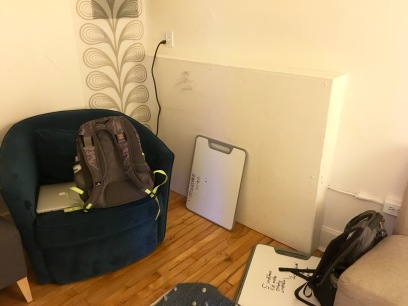 Freshman Alexa Adler is a fighter. She searched for 42 hours to find an individual conference room and walked 18,000 miles on her quest.

“When my search started, I was really hopeful,” Adler confessed. “I kept thinking, there must be at least one, but when I looked through the windows someone was always sitting there.”

After the first six hours, Adler really thought she found an empty space, “I thought I finally found something. Until I saw a huge stack of backpacks on the couches. Does that mean I can sit there, or what?”

Adler camped out in the upper school hallways until 12 p.m at night, when she finally continued her journey.

“I starting walking through the halls again,” Adler said, her eyes twitching from lack of sleep. “I could not believe what I saw: people literally had sleeping bags in the conference room. I mean I know some of those conference rooms are your ‘group hang out spots’ but this is going a little far.”

However, after 42 hours of walking back and forth throw the hallways, Adler peered through the small conference room in the upper school hallway, say empty couches, and a green available sign on screen.

“I could not believe my eyes,” Adler confessed. “I threw her backpack over the chair and began to finally record my history project voice over!”

However, exactly 3.2 minutes after the discovery of the room, Adler was kicked out by some upperclassmen who “really needed the space.”

“I left after that,” Adler said. “I was defeated.”

View all posts by Margot Amouyal